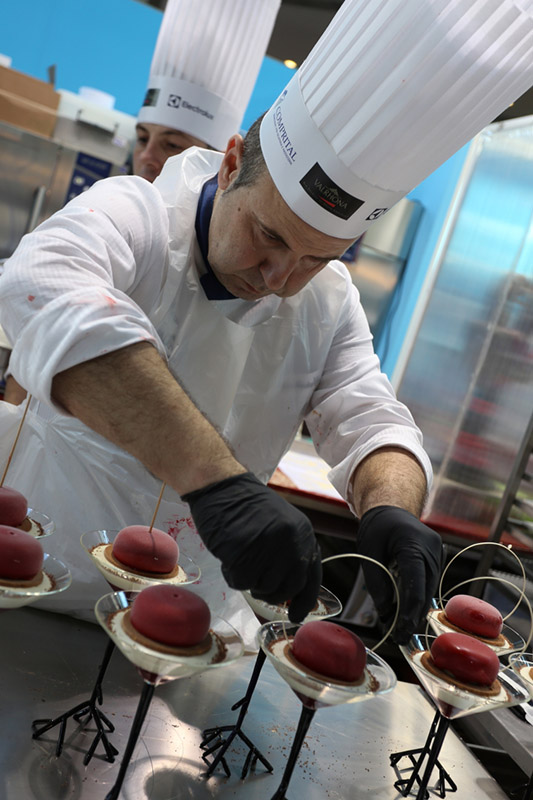 Eight cool tests are ready to surprise at the next edition of the Gelato World Cup. At Sigep, on 20-24 January 2018 at Rimini Expo, 12 national teams will compete by creating gelato, pastry, culinary and ice masterpieces.
The Asia-Pacific participation is becoming stronger: the finalists come from Argentina, Australia, Brazil, Korea, France, Japan, Morocco, Poland, Spain, Switzerland, USA and Ukraine.
Korea replaces Colombia, that had to cancel its participation for personal matters.

Two new challenges add a twist at the eighth edition. First of all the decorated gelato tray produced with one or more types of Valrhona chocolate. The platinum sponsor of Gelato World Cup returns puts in the spotlight new trends and eternal traditions in the gelato and pastry market. Then, chocolate gelato snacks, one-half serving gelato portions of the average weight of 50 grams, decorated and alligned with the theme chosen by the team. This is a real opportunity to evaluate not only taste and professionalism, but also the aesthetics of gelato and pastry artisans.

“Gelato snacks dictate a new trend in gelato: they reflect at the same time excitement, innovation and balancing skills. The gelato artisans will have to create gelato portions in line with the chosen theme, within garniture and decorations,” explains Sergio Dondoli, Commissioner race and member of the organizing committee – Each process has to comply with the weight limit of 50 grams and a maximum margin error of 10 percent, all the commissioners will have to check it carefully. “

The gelato artisans will also have to prepare a gelato cup containing at least one ingredient of Comprital platinum sponsor and a gelato cake. They will have to pass the Mystery Box skill test too. They will have to create a gelato flavor (and to explain the recipe / composition), using secret ingredients drawn and given only at the start of the test, to be presented on a cone crafted by Ostificio Prealpino. Mistery Box test is made up of a further double difficulty: gelato can match some fresh produce, herbs, spices, etc. to be chosen in a limited range.
In addition, another cone must be prepared with a flavor produced with a type of frozen fruit pulp sorted by the competitors and provided by the Golden Sponsor Capfruit with a mandatory combination of a spice or herb, or vegetable herb.
Everything will be orchestrally realized by the teamwork of professionals involved by using the most innovative machines of Carpigiani, Golden Sponsor of the Gelato World Cup.

Chefs, on the other hand, will have to prepare three hot finger food recipes in combination with the gourmet gelato chosen by each team. The tests will be carried out using Electrolux platinum sponsor machinery.
Throughout the race days, the artistic trials will be the background of the entire competition, creating moments of pure spectacle for the realization of sculptures valued with special attention to aesthetics, technical skills and focus on the Grand Final Buffet theme. The teams will have to create an ice sculpture, which will be performed every day in front of the audience. They will also have to create a gelato tray with inclusions of flowers, fruit, dried fruits, vegetables, spices or other edible ingredients that will make the base to the cake.
Everything will take place in the South Hall of the Sigep in front of the public, streamed on sigep.it and gelatoworldcup.com and commented on social with hashtag # CMG2018.

The Gelato World Cup, a biennial event organized by SIGEP – IEG Expo and Gelato e Cultura, compares the culture and the preparation of gelato, pastry, chocolate and culinary professionals selected from among the best experts on the five continents.