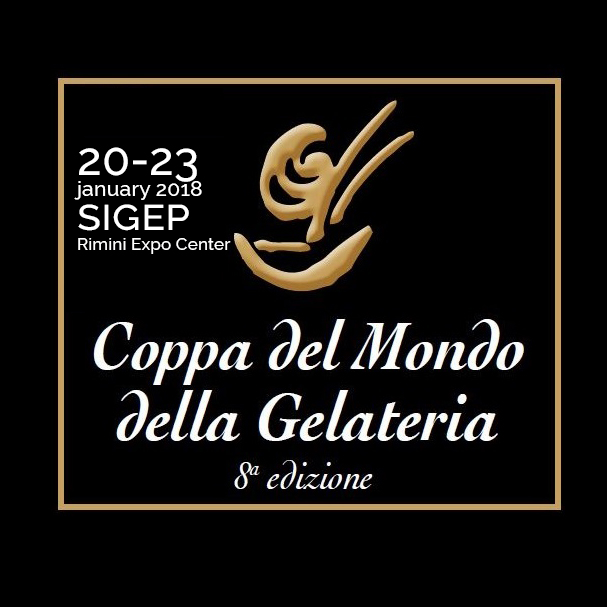 Important names of the international culinary and pastry panorama will gather at Sigep, the international gelato and artisan confectionery trade fair, to contend the coveted world champion title of the 2018 Coppa del Mondo of Gelateria scheduled for 20 to 23 January in the South Hall of Rimini Fiera. The Coppa del Mondo, a biennial event organized by SIGEP – IEG Expo and Gelato e Cultura, displays the culture and the preparation of gelato, pastry, chocolate and culinary professionals selected from among the best experts on five continents.

This year’s competition will be showcasing diverse teams of high professionalism, composed of a gelato artisan, a pastry chef, a chef and an ice sculptor. 12 teams coming from Argentina, Australia, Brazil, Korea, France, Japan, Morocco, Poland, Spain, Switzerland, Ukraine and the USA will compete in 8 trials of gelato, pastry and haute cuisine (decorated gelato tub, decorated cup, mystery box, artistic gelato cake, haute cuisine, artistic pieces and gelato desserts, at the final grand buffet, or the presentation of all the works). The Asia-Pacific participation is growing stronger: Korea replaces Colombia, that had to cancel its participation for personal matters.

The Team Managers of the 12 teams will form a technical jury that will have the task of judging the 8 races: Maximiliano César Maccarrone (Argentina), Martino Piccolo (Australia), Frederico Jardim Samora (Brazil), Kwan Kim (Korea), Elie J.H. Cazaussus (France), Marco Polo Molinari (Japan), Otmane Boumaziane (Japan), Sebastian Szmyd (Poland), Guillem Jordi (Spain), Giuseppe Piffaretti (Switzerland), Maksim Golubev, aka Massimo Gelarty (Ukraine) and Randy Torres ( USA).
The jury will be presided by the president of the World Committee of Honor, Pier Paolo Magni, accompanied by Eliseo Tonti, one of the founders of Coppa del Mondo of Gelateria and the vice-president of the Coppa del Mondo of Gelateria World Committee of Honor, Kamal Rahal Essoulami.
To monitor the progress of the race, in support of the race commissioners Sergio Dondoli and Sergio Colalucci there will be the world champions Leonardo Ceschin and Gaetano Mignano.

During all the days of the competition the artistic tests will be the background of the entire race giving the public in the Arena of the South Hall of Sigep moments of pure show for the realization of sculptures evaluated with attention to aesthetics, technical ability and to the theme in the grand final buffet set up on the field of competition on the last day of the Cup, Tuesday 23 January.
The artistic jury will be composed of experts in the field: Lorena Gava (art critic), the master Beppo Tonon (World Champion of gelato 2006 and master carver of fruit and vegetables) and Stephan Didier (Mof, national president of the French ice sculptors), with the task of judging the artistic pieces and their harmony in the Grand final buffet.

The Entrèe with gastronomic gelato trial will be evaluated by an international press jury composed by Stefan Elfenbein, president of the “Jury Berliner Meisterköche”, the jury which selects and presents Berlin’s best and most innovative chefs, by radio journalist Danielle Mitzman specializing in the field of gastronomy and in particular gelato for BBC Radio and BBC Online Magazine, by journalist and writer Alia Akkam, New Yorker, and now in Budapest where she writes about Food & Beverage for well-known international newspapers, Dylan Ooi, gelato expert based in Singapore who is contributing to the organization of the very first Asian Gelato Cup and freelance journalist Sayaka Miyamoto, who moved to Turin leaving Japan over twenty years ago, today he writes for Japanese magazines and newspapers. Together with them the publisher of PuntoIT Franco Cesare Puglisi and Emanuela Balestrino journalist of Pasticceria Internazionale, both media partners of the event, the journalists of Radio Capital Mary Cacciola and Andrea Lacatello, the curator of the blog “Jo Pistacchio”, Renato Romano, the ‘commentator and Gelato Artisan, Andrea Soban of Dissapore.